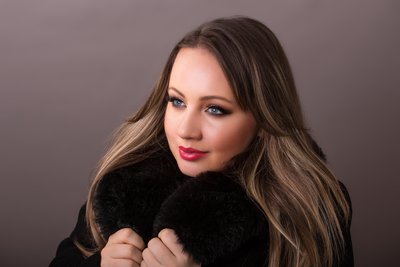 Born in Kecskemét in 1988, Zsuzsanna Ádám played the cello until the age of 12 and studied piano for five years. She was also a member – and soloist – with one of the most highly regarded girls’ choirs in Hungary: the Aurin Female Choir. After earning her bachelor’s degree in Pécs as a student of Ingrid Kertesi’s in 2013, she went on to study in the master’s programme in Szeged under Istvén Andrejcsik, graduating in 2017. During her university studies, she spent a semester in Mantua as an Erasmus student, and she also did post-graduate work at Budapest’s Franz Liszt Academy of Music under Éva Marton.
Between 2013 and 2015, she was a member of the chorus of the National Theatre of Miskolc, where she also started singing solo parts in 2014, appearing as Mercédès in Carmen and Giovanna in a condensed version of Verdi’s Rigoletto.
She also sang the role of Berta in Il barbiere di Siviglia both in Baja and at the Bartók Plus Opera Festival in Miskolc. In Mantua, in 2017, she sang the title roles in condensed versions of two operas: Puccini’s Manon Lescaut and Donizetti’s Anna Boleyn. In 2018, she made her debut at the National Theatre of Szeged as Elvira in Verdi’s Ernani. She also sang Donna Elvira in both concert and staged versions of Don Giovanni presented with the Budapest Strings.
In May 2018, at the invitation of the Hungarian State Opera, she sang the solo soprano part of Verdi’s Requiem at the Comedy Theatre of Budapest, and she later portrayed Maddalena in Rigoletto.
The year 2019 has seen her make her role debut as Erzsébet Szilágyi in Hunyadi László at the National Theatre of Miskolc, followed in the spring by her first appearance at the Hungarian Opera of Kolozsvár (Cluj-Napoca), where she sang the role of Magda in Puccini’s La rondine. This production is also being presented at the Erkel Theatre in May 2019. In this same year, she is also singing the title role of Aida at the Szeged Open-Air Festival, and she will also return to the Hungarian State Opera as Erzsébet Szilágyi.