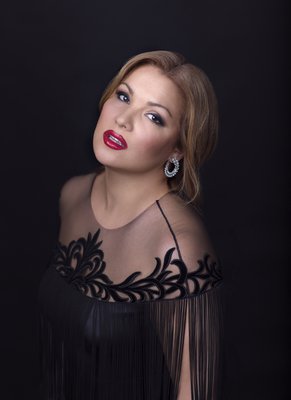 The most acclaimed soprano in the world, Anna Netrebko has redefined what it means to be an opera star. From singing at the opening ceremony of the 2014 Winter Olympics to becoming the first classical artist named to TIME magazine’s list of the world’s 100 most influential people, she serves as opera’s leading global ambassador. In live performance and on award-winning recordings, Netrebko’s portrayals of opera’s most iconic heroines have already made an indelible mark. Now, as she ventures into bolder, more dramatic repertoire, she continues to reach new heights.

Born in 1971 in the Russian city of Krasnodar, Netrebko studied vocal performance at the Saint Petersburg Conservatory.
In the 2017-18 season, she will debut as Aida at the Salzburg Festival, as Maddalena in Giordano’s Andrea Chénier for her second opening night of La Scala, and as Tosca at the Metropolitan Opera, all in new productions. At the Vienna State Opera, she will sing Leonora in Il trovatore and later make her company role debut as Cilea’s Adriana Lecouvreur. Later, at the Paris Opera, she is revisiting her once signature role of Violetta in La traviata, and in the spring she will bring her celebrated portrayal of Lady Macbeth to London’s Royal Opera House for the first time. In addition, she and tenor Yusif Eyvazov, her frequent on-stage partner and real-life husband, are embarking on a season-long concert tour of three continents, singing both operatic favourites and songs from their new duets recording, Romanza.
Among Netrebko’s many honours are a 2017 International Opera Award for “Best Female Singer”; the 2016 Opera News Award; Musical America’s 2008 “Musician of the Year”; three Grammy Award nominations; Germany’s prestigious Bambi Award and eleven ECHO Klassik awards; the UK’s Classical BRIT Awards for “Singer of the Year” and “Female Artist of the Year”; the Russian State Prize and designation “People’s Artist of Russia”; and an Austrian “Kammersängerin” title.
A passionate advocate for children’s causes, Netrebko supports a number of charitable organizations, including SOS-Kinderdorf International and the Russian Children’s Welfare Society.