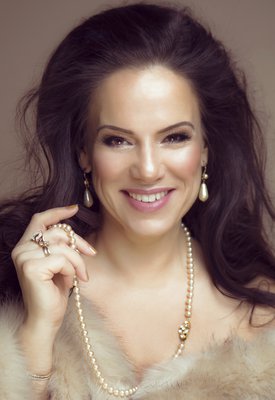 Dutch soprano Annemarie Kremer studied singing and piano at the Maastricht Conservatory, and later dance. She made her debut at Ilia at the Stadttheater Aachen in Mozart's Idiomeno.
Since then, she has been singing at the most prestigious opera houses in Europe and the world.
Recently she had great personal successes as Manon Lescaut  at the Deutsche Oper Berlin conducted by Sir Simon Rattle, Isolda at the State Opera House of Karlsruhe-Germany, Turandot at Teatro Municipal Sao Paulo and Violanta at Teatro Regio di Torino - Italy.
Annemarie Kremer is noted for her exciting portrayals of some of opera’s most complex leading ladies.
Annemarie sang her first SALOME - now one of her core and celebrated roles - in Vienna VO in 2011 and was hailed by the press for her triumphant successful debut. To then be invited as SALOME in Moscow, Săo Paulo-Brasil, Hong Kong Opera, Naples-Italy, Essen and Hannover-Germany.
Upcoming productions in season 2021/2022 will be a.o. Macbeth (Lady Macbeth) at Landestheater Salzburg, Il Tabarro (Giorgetta) at the Aalto Theater Essen, Wozzeck (Marie) at the Operahouse of Monte Carlo, Monaco.
In 2012 she made her debut as Norma in the UK at Opera North. For her interpretation of the title heroine (in this production marked with the TMA Award), she was nominated by the Magazin Opernweltas 'singer of the year 2012'. She also received a nomination from the International Opera Oscars.
Annemarie Kremer has recorded several CDs: arias and masses by Mozart, works by Mendelssohn, Beethoven Symphony No. 9, Das Wunder der Heliane (NAXOS-2018). Her Agrippina is available on DVD, as well as her Violanta in Turin (NAXOS- 2019). Many of her opera productions have been broadcast internationally, Tannhauser-Monaco (Elisabeth), Don Giovanni-Paris (Donna Anna/Donna Elvira), Penderecki Requiem-BBC, Agrippina-Amsterdam, Violanta-Torino.