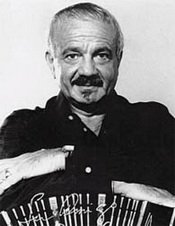 Astor Piazzolla was an Argentine composer, conductor and the creator of tango nuevo.
He spent his childhood in New York, where he started to play music on the bandoneon he received from his father. He also met the tango legend Carlos Gardel and started to take lessons in classical piano from the Hungarian-born Béla Wilda, a former student of Rachmaninoff's. After the family's return to Argentina in 1937, Piazzolla began to play in various orchestras, clubs and cabarets, and also composed music. At the advice of Arthur Rubinstein, he pursued classical academic training from composer Alberto Ginastrera.
In the early 1950s, Piazzolla wrote several orchestra and chamber works, including Rapsodía porteña (1952), the Buenos Aires Symphony (1953), which won him professional recognition, as well as Sinfonietta (1954), for which he received an award. In 1954, a scholarship took him to Paris to study with Nadia Boulanger, who encouraged him to develop his own musical language. Returning home to Argentina, he founded the Octeto Buenos Aires ensemble (composed of two bandoneonists, two violinists, and one musician on each double bass, cello, piano and electric guitar), with whom he played a new interpretationi fo tango music, thus creating Tango Nuevo. While Argentina was under a military dictatorship (1976-1983), Piazzolla resided in Italy.
Both jazz and the music of Johann Sebastian Bach continued to influence him throughout his entire life. He wrote more than 300 tangos and nearly 50 film scores. Piazzolla's oeuvre incorporated both tango and the bandoneon into the realm of classical music.