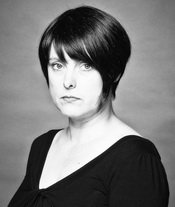 After pursuing her studies at the Hungarian University of Arts and Design between 1992 and 1997, Ibolya Bárdosi made costumes for examination productions at the Hungarian Academy of Dance, and also worked at both the Szkéne and Merlin theatres (Duo, 1996-1997), as well as at the Madách Theatre (Seasons, 1997). She has designed costumes for a number of successful feature films, including A Kind of America (2001), The Hungarian Strayer (2003), Liza the Fox-Fairy (2012) and The Invincible (2015). In 2009 she worked together with Géza M. Tóth on his short film Mama, which was followed by more collaboration on Where the World Unfolds - The History of Hungarian Opera (2014) and Opera130: The Palace of the Boulevard (2015). She has taken part in a number of exhibitions, both jointly (Tölgyfa Gallery, Eventuell Gallery, Museum of Applied Arts) and solo (FISE Gallery and Szombathely's House of Art). She worked on the costumes for Das Rheingold, Die walküre and Siegfried in the Opera's new production of the Ring.