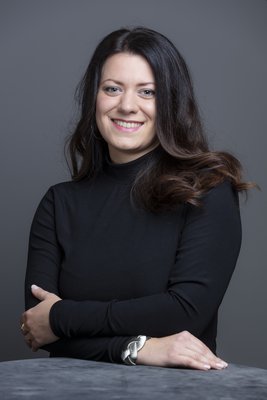 Andrea Brassói-Jőrös started her musical studies in the piano programme at the Viski Art School at the age of five under Katalin Czébely. Later on and in parallel, she also took up folk singing with Eszter Pál. In 2006, she entered Debrecen's Zoltán Kodály High School of Music to continue her studies in solo voice and piano under Gabriella Magyar and Ildikó Sőrés. She then went on to obtain her degree in classical voice at the University of Debrecen's Faculty of Music in the programme headed by Éva Mohos Nagy in 2014. In September of that same year, she joined the opera master's degree course at Budapest's Franz Liszt Academy of Music headed by András Almási-Tóth under the guidance of Júlia Pászthy, graduating in June of 2016. She has taken part in master classes with Magda Nádor, Timothy Bentch, Júlia Hamari, Yevgeny Nesterenko, Rost Andrea, Errico Fresis and Francesco Torrigiani.
In the course of her career so far, she has won some notable awards, including the József Gregor Special Prize at the József Simándy International Singing Competition in 2010 and sharing second prize and winning the special prize for best singing of a Mozart aria at the First Éva Andor Singing Competition in 2016, while also winning first prize at the First Erzsébet Házy Talent Competition Search Competition in September of that same year and grand prize at the Armel Opera Festival's song competition in July of 2017.
In the 2013/14 season, the audience at Debrecen's Csokonai National Theatre got to hear her in the role of Donna Anna in Mozart's Don Giovanni. At her examination performances at the Liszt Academy, she sang Giulia in Rossini's La scala di seta and the title role of Tchaikovsky's Iolanta, with her dissertation performance in May 2016 in the role of Titania in a co-production by the music academy and the Hungarian State Opera of Britten's A Midsummer Night's Dream.
In 2017, she featured in numerous concerts, with a special emphasis on concerts of contemporary music. These included singing in Concerto Budapest's series The Day of Listening, where she appeared in György Kurtág's work Scenes from a Novel and the soprano solo part in a performance of Kodály's Te Deum of Buda Castle at a concert of the Kodály Philharmonic in Debrecen and many independent song recitals at concert halls abroad. In May 2018, she took part in another in a co-production by the music academy and the Hungarian State Opera, this time of Paul Hindemith's opera The Long Christmas Dinner, in the role of Leonora.