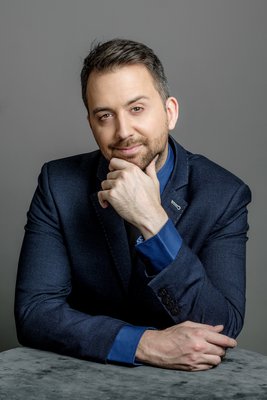 Attila Erdős began his musical education at an early age. After ten years of studying piano, he focused on a singing career. His first teacher was Éva Dunai. In 2010, he entered the voice department of the Béla Bartók Conservatory to study under Brigitta Kovács, and in 2012 was admitted to the Ferenc Liszt Academy of Music, where he became a student of Kossuth Prize-winning opera singer Éva Marton. There, he earned both his B.A. and his M.A. in the opera department.
He has taken part in master classes with Júlia Hamari, Francesca Provvisionato, Johannes von Duisburg, Nicholas Clapton, Francesco Torrigiani, György Vashegyi and Thomas Quasthoff. At the music academy, he participated in numerous concerts and opera examinations. He took the stage as Creon in Antonio Cesti's Orontea as part of the 2016 Budapest Spring Festival and as Baldo in in Szabolcs Mátyássy's piece Scaevola at the 2017 Bartók Plus Opera Festival in Miskolc. Also in 2017, he sang the role of Brent Colgate in Gergely Vajda's comic opera Georgia Bottoms as part of the CAFe Budapest Contemporary Arts Festival.
At the Hungarian State Opera, he sang the role of Meru in Les Huguenots in October 2017 and sings Silvano in Un ballo in maschera in April 2018.