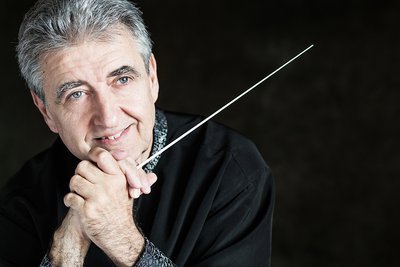 Budapest-born Gábor Hollerung pursued his education in the Ferenc Liszt Academy of Music's choral directing and conducting course, where he was taught by Zoltán Vásárhelyi, István Párkai and András Kórodi. He then completed his master's degree studying under Eric Ericson, Kurt Masur and László Somogyi. After a stint as second conductor of the Miskolc Symphony Orchestra starting in 1979, he taught music theory, music history and conducting at Janus Pannonius University in Pécs from 1981 until 1983. Working with the Hungarian Army Ensemble between 2001 and 2008, he served first as music director, and later as its artistic director. In 1989, he took up the post of principal conductor of the Dohnányi Orchestra Budafok, and he has served as its managing music director since 2001. He has also guest conducted numerous other Hungarian orchestras, and worked as principal guest conductor of the Jerusalem Symphony Orchestra from 2002 to 2005 and as musical consultant for Tel Aviv's Philharmonia Singers from 2002 until 2007. He has also taken the podium as a guest conductor with the Israel Philharmonic, the Cincinnati Symphony Orchestra, the Brazilian Symphony Orchestra, the Shanghai Symphony Orchestra, the Canton Symphony Orchestra and the Taiwan National Symphony Orchestra, as well as numerous European orchestras. His work has been recognised with numerous awards and distinctions: he has won the Artisjus Award twice, in 1998 and 2008, and was presented with the Knight's Cross of the Order of Merit of the Republic of Hungary in 2002, the Ferenc Liszt Award in 2004 and the Jerusalem Award in 2006 and the Award for Budapest in 2016. He was named an Artist of Merit in 2015.