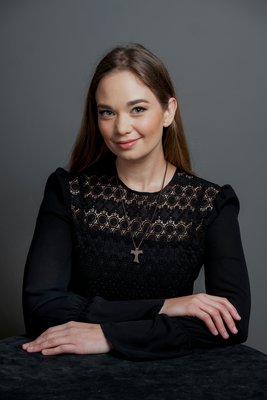 Born in Esztergom, Hungary, Réka Piroska Jónás, was encouraged at the age 16 by her very first voice teacher, Dr. Patricia Fleitas to seriously consider pursuing a career in classical music.

Having been awarded a “Special Talent Scholarship” and the “Steinhardt Music Talent Scholarship”, she attended New York University’s Vocal Performance program where she majored in Classical Voice, studying in the studio of renowned soprano, Rosa Vento.

She graduated with her Bachelor of Music degree as a “Founder’s Day Honor Scholar” and was accepted into graduate school at the Manhattan School of Music and the Jacobs School of Music, however she chose to continue her studies with Maestra Vento at New York University as a dual degree student majoring in Classical Voice and Vocal Pedagogy.

She was chosen as the 2019 Walter Reinhold Scholar of New York University’s Department of Music – a distinction that is awarded to only one music student every year. She graduated that same year with her Master of Music and Post Master’s Advanced Certificate degrees.

She was part of the Adjunct Voice Faculty at New York University for two years while attending graduate school there.

During her studies at NYU, she had the opportunity to step onto the stage of the Frederick Loewe Theater and breathe life into roles like,
La Fée (Massenet: Cendrillon),
Blanche (Poulenc: Dialogues des Carmélites),
The Queen of the Night (Mozart: Die Zauberflöte),
Mme Herz (Mozart: Der Schauspieldirektor)

In New York, Réka was invited to sing at multiple events that were held by the Permanent Mission of Hungary to the United Nations.

The fall after graduation, at the age 24, she had the honour to accept three incredible coloratura roles that were presented to her by the Hungarian State Opera. The Soprano Solo in Carmina Burana, the Queen of the Night in The Magic Flute for Children, and Olympia in The Tales of Hoffmann.