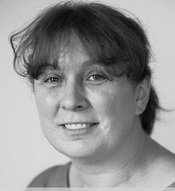 
Katalin Juhász was born in Budapest in 1961 and studied set and costume design at the Academy of Fine Arts, graduating in 1985. In that same year, she started working for Hungarian Television, but also frequently worked as a guest designer at theatres (in Debrecen, Pécs, Miskolc, Nyíregyháza and Szeged). Her work is marked by a unified scenographic vision and constructivism. She has been designing theatre sets since 1988. In 1998, she signed with the National Theatre of Miskolc. Her designs for the Opera comprise Verdi's Il trovatore, Mascagni's Cavalleria rusticana, Leoncavallo's Pagliacci and Mozart's Le nozze di Figaro.