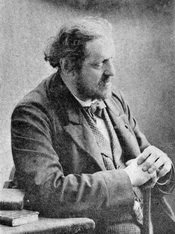 
(1825-1901)
Librettist and playwright Jules Barbier wrote librettos for every major French composer of his era, including for works by Gounod, Meyerbeer, Bizet, Thomas, Saint-Saens and Offenbach. Born in Paris, Barbier was already writing short comedies at a young age, and later gained his first major success with his dramatic work Jeanne d'Arc, for which Gounod wrote the incidental music. He frequently worked, as both a librettist and dramatist, together with Michel Carré. They found their greatest collaborative success with the libretto they wrote for Gounod's Faust, which they adapted from the work by Goethe. They also crafted for Gounod the librettos for Philémon et Baucis and Roméo et Juliette, while also providing Ambroise Thomas with the text for Mignon, Hamlet and Françoise de Rimini.