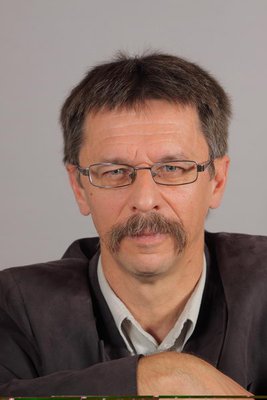 Árpád Köncei was born on 16 January 1959 in Margitta (Marghita), in Romania. After graduating from the High School of Music in Kolozsvár (Cluj-Napoca), he went on to earn his degree in music composition at the Gheorghe Dima Music Academy in the same city, in 1983. Encouraged by his father, he started to develop an interest in traditional folk music and folk dance alongside his formal music studies.
In 1977, he became one of the initiators of Kolozsvár's Transylvanian dance house movement. From 1995 until 2013, he worked as an editor for Duna Television, where he compiled various artist portraits, such as Tálentum and Kézjegy (“Hallmark”), and music and dance programmes. Since January 2013, he has worked on a freelance basis, including with the Hungarian Academy of Arts and, later on, the Hungarian Academy of Arts Research Institute of Art Theory and Methodology.
He has received numerous awards, including the Hungarian Cultural Society of Transylvania (EMKE) Award in 1994, and the Theatre Union of Romanian (UNITER) Award for theatre music in 2012. His 2012 staging of For a Hundred Years received an award for “best production of the year”, and his staging of The Gang was selected one of the top three productions at the 2014 ATELIER Festival, where it also received a special prize. In 2019 he received the Gyula Harangozó Award.

His most important creative works and choreographies for the stage:
For the Háromszék Dance Ensemble:
Mundruc (2017)
The Gang (2013)
For a Hundred Years (2011)
Devilshift (“Ördögváltozás”) – a dance drama after the work by Áron Tamási (2005)
Ábel – a dance theatre piece after the work by Áron Tamási (1997)
The Bride is a Beautiful Flower (1993)
A wedding song from the Mezőség region (1993)
My Father's Dance (1992)
For the Maros Art Ensemble:
It's Passing Away (2016)
Son of the White Mare (2004)
Dances from the Region of the River Küküllő (2001)
Tale of Soldiers (1998)
Floating (1998)
As a guest choreographer:
Choreographies for the Duna Art Ensemble, the Hungarian State Folk Ensemble and the Udvarhely Folk Dance Workshop