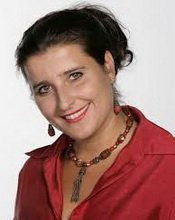 After graduating from high school in Strasbourg in 1996, Yvette Alida Kovács studied at the Romanian Academy of Applied Arts in 1996/97 and at the Hungarian University of Fine Arts between 1997 and 2002. In 1999, she studied at the Chinese University of Applied Arts, where she earned a third degree. She is currently a doctoral candidate at the University of Theatre and Film Arts in Budapest. She worked as a set and costume designer at Szolnok’s Szigligeti Theatre from 2003 until 2007, at Budapest’s Chamber Theatre between 2007 and 2011 and at the Hungarian Theatre of Pest from 2011 until 2015. She started teaching art at the Lycée Français de Budapest in 2010, before moving to her current position at the Hungarian Drama Academy of Pest in 2012. She won the Nelly Vágó Award for her work as a costume designer in 2008. She has been involved in more than 200 productions as a designer and is regularly engaged to participate in productions at the Szeged Open-Air Festival and at the László Papp Budapest Sports Arena, as well as at the Madách Theatre, the Hungarian Theatre of Pest, the Játékszín Theatre and numerous other venues around Hungary. At the Hungarian State Opera, she has worked on productions with János Szikora (Werther and Les Huguenots) and Tamás Szirtes (Billy Elliot – the Musical).