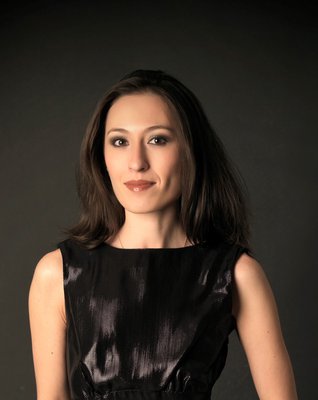 Born in 1981 in Istanbul, Başak Dilara Özdemir Lakatos started studying piano at the age of seven at the Istanbul State University Conservatory. In 1999, she was accepted to the Ferenc Liszt Academy of Music in Budapest, where she earned a master’s degree in music composition in 2004, graduating summa cum laude. In 2005, she was accepted to the Conservatoire National Supérieur de musique et de danse de Paris, under the guidance of Itamar Golan, and was also selected to attend IRCAM (Institut de Recherche et Coordination Acoustique/Musique) for studies in electroacoustic composition in Paris. She has been playing concerts throughout Europe, Israel, and Canada from an early age and has worked with various composers and pianists, such as Jonathan Harvey, Brian Ferneyhough, Hugues Dufourt, Hanspeter Kyburz, Zoltán Jeney, Andrea Szigetvári, Roland Batik, Vitaly Margulis and Sergei Dorensky.
She has received many recognitions over the course of her career, including Junior Chamber International's TOYP (Ten Outstanding Young Persons) artistic/cultural award for outstanding young personalities in 2004, a scholarship from the Nadia and Lili Boulanger International Centre, as well as sponsorship awards that were created specifically for her by Koç and Eczacıbaşı, two Turkish corporations that sponsor culture and the arts. She has also achieved impressive results at competitions like the Liszt Academy's music composition competition and Haydn and Mozart piano competition for special talents, as well as at the music composition competition held by the Goethe-Institut at German and Canadian music academies, where she represented Germany in Canada with a string octet.
She has also had her works published by EME Publish (Editions Musicales Européennes-Paris) since 2006. Between 2008 and 2014, she worked at the Istanbul State Opera as an opera répétiteur and ballet piano accompanist and assistant to the chief conductor. Afterwards, she served as a répétiteur at the Csokonai National Theatre in Debrecen. Since 2016, she has been working at the Hungarian State Opera as a piano accompanist for the Hungarian National Ballet, and is currently the coordinator of piano accompanists.