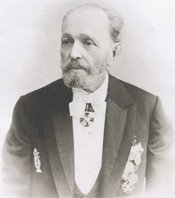 (1819-1910)
Marius Petipa was one of the most influential figures of classical ballet. He was born in Marseilles. His father was a dancer, and Petipa began dancing in his father’s travelling company aged nine. Aged 16 he joined Théâtre Nantes, where he also created a number of ballets. He studied in Paris with Auguste Vestris before going on to work as a dancer around France. In May 1847 he arrived in St Petersburg and two months later made his debut as principal dancer and ballet master of the Mariinsky, starring in his re-staging of Joseph Mazilier’s Paquita. His breakthrough as a choreographer came in 1859 with his production of La Fille du pharaon, and in 1869 he was made chief choreographer. In addition to creating original works such as Don Quixote (1869) and La Bayadère (1877), he restaged pre-existing works, including Jean Coralli and Jules Perrot’s Giselle (1884) and Arthur Saint-Léon’s Coppélia (1884). Petipa’s 1890 production of Tchaikovsky’s The Sleeping Beauty was followed by productions of The Nutcracker (1892) and Swan Lake (1895), both created with Lev Ivanov. His last great work was Raymonda (1898), before he retired in 1903.