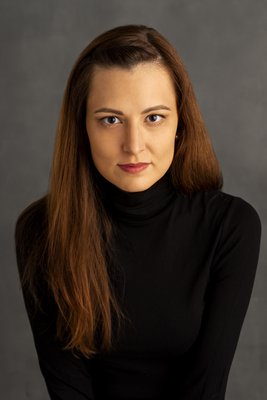 She has recently formed the role of Vlasta in M.Weinberg’s Die Passagierin at the Tiroler Landestheater in Innsbruck, as well as Page in R.Strauss’ Salome both in Innsbruck and at the Badisches Staatstheater in Karlsruhe.

She is making her Hungarian State Opera debut in October 2022 as Dido in Purcell’s Dido and Aeneas, followed by the role of Diana in Gluck’s Iphigénie en Tauride in May 2023.

She completed her master’s degree in opera performance at the Mozarteum University in Salzburg in 2020 in the class of conductor Kai Röhrig and director Karoline Gruber. During the last year of her studies she was already a member of the Salzburger Landestheater’s international opera studio where her roles included Dorothea (G. Donizetti: Viva la mamma), Edelknaben (R. Wagner: Lohengrin), Fatima and Meermädchen (C.M. Weber: Oberon), and Daisy in the Austrian premiere of Stuart MacRae’s contemporary opera, Anthropocene. (Along with several of her upcoming projects, Anthropocene also got cancelled due to Covid-19.)

Regularly appearing as a concert singer, she sang the alto solo in numerous oratorios; such as in Rossini’s Petite Messe Solennelle and Mozart’s Requiem, and she has a strong interest in Lied interpretation too.

Keen on always improving and developing her art both as a singer and as an actor, Zsófia participated in various master classes; amongst others with Felicity Lott, Kobie van Rensburg, Andrew Watts, Tobias Hasan, Sebastian F. Schwarz, Peter Berne and Hedwig Fassbender. She is grateful to have worked with conductors and stage directors, such as Lukas Beikircher, Tommaso Turchetta, Adrian Kelly, Ido Arad, Leslie Suganandarajah, Kai Röhrig, Josef Wallnig, Karoline Gruber, Steven Medcalf, Christian Poewe, Andreas Gergen and Johannes Reitmeier. Her current teacher, Katharine Goeldner, as well as her previous ones, Boldizsár Keönch, Annamária Schmiedt and Elisabeth Wilke have been of key importance in her development, along with her pianists, Katia Borissova, Chariklia Apostolu, Lenka Hebr, Stefan Müller, Alessandro Misciasci and Ferenc Szabó.