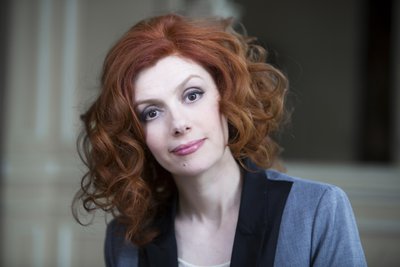 Receiving her musical education at the Conservatoire National Supérieure de Musique with Rachel Yakar and discovered by William Christie, soprano Patricia Petibon has earned a stellar reputation as one of the most versatile interpreters of her fach with a repertoire extending from French Baroque to contemporary music. Ever since her first steps on stage in 1996 in Rameau’s Hippolyte et Aricie, she has been on a constant expedition through musical history, covering the literature from Mozart to Offenbach, Donizetti and Verdi, all the way to Poulenc and Berg, always performing on the foremost stages around the world.

That the soprano remains loyal to Baroque Music is strongly underlined by her appearances in Handel’s Ariodante (Ginevra) in Aix-en-Provence or the title role in Handel’s Alcina again in Aix-en-Provence. One of the most outstanding successes she garnered as Giunia in Mozart’s Lucio Silla at the Theater an der Wien, led by Nikolaus Harnoncourt with whom she enjoyed a very close collaboration.

Further highlights of her career include Lulu in Geneva, at the Salzburg Festivaland in Barcelona, her interpretations of DonnaAnna (Don Giovanni) at the Opéra Bastille in Paris, Gilda(Rigoletto) in Munich, Blanche in Dialogues des Carmélites at the Théâtre des Champs-Elysées in Paristhe title role in Jules Massenet’s Manon at the Opéra Comique in Paris,the title role in Strauss’ Salome and Poulenc’s La voix humaine at the Théâtre des Champs Elysées.

The current season 2021-2022 includes the title role in Pelléas et Mélisande at the Théâtre des Champs Elysées, Bernstein’s A Quiet Place at the Opéra National de Paris. In addition to several recitals with her pianist Susan Manoff, Patricia Petibon appears amongst others on tour with La Cetra and Andrea Marcon as well as with Amarillis and Héloïse Gaillard.

Patricia Petibon has signed a new recording contract with Sony Music Masterworks. Her first album under the label of Sony Classical with the title L’amour, la mort, la mer was released in January 2020.