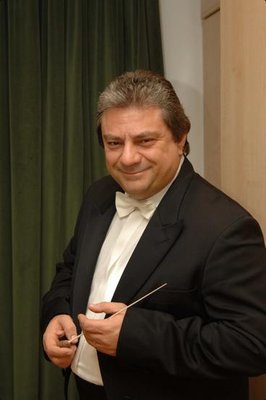 
After spending ten years earlyin his career as the principal oboist of the Orchestra del Teatro alla Scala in Milan, Pier Giorgio Morandi wenton to study music composition at the city's music conservatory and, later on, trained as a conductor under Ferdinand Leitner at the Mozarteum in Salzburg. At La Scala, he served as assistant to Riccardo Muti and Giuseppe Patanè before heading to the United States in 1987 to study with Leonard Bernstein and Seiji Ozawa. Named second principal conductor of Rome's Teatro dell'Opera in 1989, he has been a permanent guest conductor at the Hungarian State Opera since 1991. He has conducted at the world's leading opera houses and worked with such orchestras as the Hungarian Radio Symphony Orchestra, the Budapest Philharmonic, the Flemish Radio Orchestra, Rome's Orchestra dell'Accademia Nazionale di Santa Cecilia, the Orchestra del Filarmonico di Verona, the Orchestra Sinfonica di Sanremo and the Fukuokaand Tokyo philharmonics. He is currently the Helsingborg Symphony Orchestra's principal guest conductor.