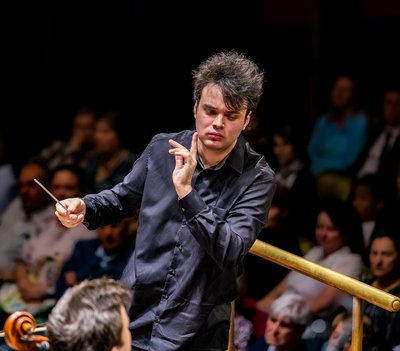 The outstanding young conductor Martin Rajna was born in 1995 and studied piano and music composition at Budapest’s Béla Bartók Conservatory before enrolling at the Franz Liszt Academy of Music. There, he earned his bachelor’s degree in conducting and choral conducting in 2018, after taking the helm of the Győr Philharmonic Orchestra in a performance of Bartók’s Concerto for Orchestra as his conducting thesis concert. At the music composition competition run by the Liszt Academy in 2016, he merited a special performance award after conducting Ádám Brandenburg’s winning work, and he received a National Higher Education Scholarship the following year. He has taken part in conducting master classes held by György Vashegyi, Zsolt Hamar and others

From 2017 until 2019, he served as an assistant conductor with the Győr Philharmonic Orchestra, where he conducted his first subscription concert at the age of 23. During that period, in 2018, he became the youngest artist ever to win the Junior Prima Award for work as a conductor. The prize included an invitation from Tamás Vásáry to conduct the Hungarian Radio Symphony Orchestra in January 2019. His musical tastes have been formed by listening to recordings by conductors of relatively recent times, like Carlos Kleiber, Ferenc Rados, Zoltán Kocsis and Dezső Ránki, although he has been influenced just as much by the work of the older great generation as well, including Willem Mengelberg, Sergiu Celibidache and György Széll. The oeuvre of Béla Bartók has been a source of fascination for him from a young age and plays a central role in his repertoire today.

The 2019/20 season has brought him several significant opportunities to make several debuts, conducting the Brandenburgisches Staatsorchester Frankfurt in Potsdam and the Hungarian National Philharmonic in the Grand Hall of the Liszt Academy in Budapest. Also over the course of the season, he will conduct the Raanana Sinfonietta in Jerusalem and the Dohnányi Orchestra Budafok in the Béla Bartók National Concert Hall at Müpa Budapest.

Previously, he appeared at the Eighth ECA International Clarinet Festival, where he conducted such illustrious musicians as Jonathan Cohler, Pavel Vinnitsky and Matthias Mueller. He regular performs concerts with pianist Fülöp Ránki, with whom he plays various piano concertos by Mozart, Beethoven, Liszt and Bartók with the exceptional harmony of a shared interpretation. Rajna also frequently conducts at thesis concerts and has premiered the works of numerous young composers at the Liszt Academy. He is made his Hungarian State Opera debut in 2020, at the Opera's Inaugurating the Eiffel Art Studios Park with Jonas Kaufmann gala.