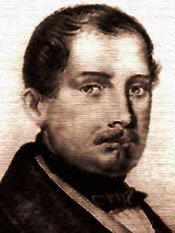 
(1801-1852)
Salvatore Cammarano was an Italian librettist and dramatist who attained his greatest success with the libretto he crafted for Donizetti's Lucia di Lammermoor. He also worked on half a dozen other librettos for Donizetti, including Roberto Devereux (1837). For Verdi, he wrote the librettos for Alzira (1845), La battaglia di Legnano (1849) and Luisa Miller (1849), and was involved in the work on Il trovatore, which later had to be completed by Leone Emanuele Bardare after Cammarano's death in 1852.