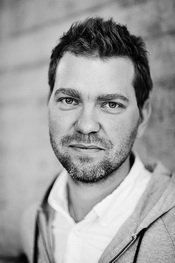 
Sebastian Hannak studied stage and costume design at the Kunstakademie Stuttgart with Jürgen Rose and Martin Zehetgruber. During his study he did a working stay with David Hockney in Los Angeles, afterwards assistentship for stage- and costume design at various European theatres inter alia with Klaus- Michael Grüber, John Neumeier and Johann Kresnik. Meanwhile and from then on he created his own stage designs for theatre, opera and ballet in collaboration with the directors Christof Nel, Hansgünther Heyme, Martin Nimz, Florian Lutz, Yuval Sharon, András Almási-Tóth, Tim Plegge, Reginaldo Oliveira, Jörg Mannes, Eun-Me Ahn, Michael v. z. Mühlen, Simon Solberg, Marie Bues and Joachim Schloemer.
His works were nominated for annual stage design of the year awards and exhibited as youngest participant in the German pavilion at the Prague Quadriennale 2007. He won the prestigeous Faust Award 2017 for his Stage Raumbühne HETEROTOPIA. The Critics' survey of the Theatre journal Die Deutsche Bühne nominated him as one of the three most succesful artists in 2017. Also in 2017 he was Winner of the Weltenbauer Award.
In 2004/06 he held a scholarship at Forum Neues Musiktheater in Stuttgart, in 2005-2007 at the Akademie Musiktheater Heute, where since 2015 he is member of the board of advisers and was member of jury in the same year for stage- and costume design. He designed the front pages of the theatre journal Die Deutsche Bühne in 2008 and contributes photographs and Graphic Design. He has published various Texts about theatrical space and is editing and publishing books, the latest Book is about his work on the Award winning 360° Stage at the opera Halle, Raumbühne HETEROTOPIA at Theater der Zeit publishing house in April 2018.
Hannak lives and works in Heidelberg, Germany.