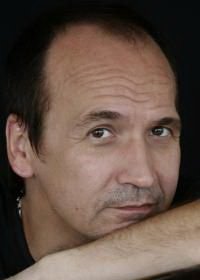 Csaba Sebestyén graduated from the Hungarian State Ballet Institute in 1980, after studying under József Forgách. In 2000, he earned a degree qualifying as a dance teacher of classical ballet, and later graduated from the choreography course at the University of Theatre and Film Arts in 2007. His first position was at the Ballet Company of Győr, where he worked as a soloist, an assistant and as a coaching ballet master. He performed in the ensemble's repertoire productions, and also danced in all of its guest appearances abroad, taking the stage in the United States, India, Japan, China, Germany, Greece, Turkey, Italy, France, Denmark, the Netherlands, England, Israel, Austria, South Korea, Finland, Russia, Poland and Czechoslovakia. In 1991, he became deputy head of the corps de ballet at the Madách Theatre. This job was followed by a series of assignments: first as ballet master for the corps de ballet at the Budapest Chamber Theatre and Central European Dance Theatre, then as ballet master at the Budapest Opera Theatre and as choreographer at the National Theatre. He started teaching classical ballet at the Ballet Company of Győr's school of art in 1984. In 1993, he began instructing students at the University of Theatre and Film Arts as part of their musical training. He started his teaching work at the Hungarian Academy of Dance in 1994, first as a teacher of arts, then as an assistant lecturer, and later on as a senior lecturer. He has been an associate professor there since 2003. He regularly works with both Hungarian and international students, and also enjoys assisting with the professional development of younger instructors. He serves on the board of both the Hungarian Association of Modern Dance Groups and the Hungarian Dance Show Association, where he is involved in training dance instructors and coaches, as well as acting as a judge and jury chairman at competitions. He holds professional courses for the artists of Ballet Pécs and the dance department of the National Theatre of Miskolc.
His work has been recognised with numerous honours: in 2003 he was decorated with the Silver Cross of Merit of the Republic of Hungary, and he also received the Gyula Harangozó Award in 2006. In the course of his work as a choreographer, he has worked together with László Vámos, István Iglódi, János Ács, Attila Vidnyánszky, Miklós Szinetár, Viktor Nagy and numerous other directors. Collaborating with them, he has created the choreographies for numerous pieces of music and musicals both in Budapest and in many cities around the country. Since 2007, he has been the choreographer for the New Year's programme “Music Without Borders” broadcast live on M1 and Duna Television.