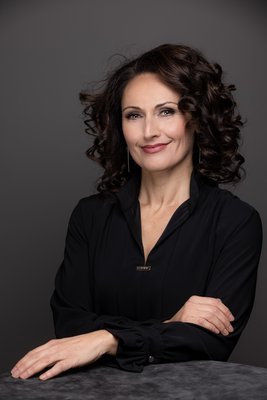 Born in Berettyóújfalu, Andrea Szántó launched her musical studies at the Gyula Music School with József Csiky, later becoming a student of Valária Berdál at the Szeged Conservatory. She earned her diploma from the Ferenc Liszt Music Academy in Budapest in the course headed by Éva Andor. Her artistic and vocal development has been aided by Erzsébet Komlóssy and Margit Kaposy, and she is currently working with Dana Mihaylova. She was still a student at the academy when she shared first prize, and won Hungarian Radio and Television's special prize, at the First International Baroque Singing Competition.
After completing her studies, she signed with the Hungarian State Opera. A former member of Theater-Bielefeld, she would go on to become a soloist at the National Theatre Mannheim, where she made her debut in the role of Judit (in Bartók's Bluebeard's Castle) under the baton of Adam Fischer. With a repertoire embracing more than 50 operatic roles and also as a concert singer, she has performed at the Bregenz Festival and the Schwerin Castle Festival, as well as in such cities as Vienna, Graz, Hannover, Frankfurt, Edinburgh, Glasgow, Zagreb, Toulouse, Nagoya, Sapporo and Tokyo. The list of composers she has collaborated with includes Christoph Eschenbach, Tamás Vásáry, Adam Fischer, Kobayashi Ken-Ichiro, János Kovács, Zoltán Kocsis, Friedemann Layer and Howard Williams, and she has also worked with numerous major directors, such as Hans Neuenfels, Christopher Alden, Achim Freyer and Philip Himmelmann.
Principal roles: Eboli (Don Carlos), Preziosilla (La forza del destino), Santuzza (Cavalleria rusticana), Laura (La Gioconda), Elisabetta (Maria Stuarda), Adalgisa (Norma), Judit (Bluebeard's Castle), Kundry (Parsifal), Ortrud (Lohengrin), Venus (Tannhäuser), Charlotte (Werther), the title role in Carmen, Dalila (Samson et Dalila) and Marina (Boris Godunov).
She was appointed Chamber Singer of the Hungarian State Opera for the 2022/23 season. She earned the Zoltán Závodszky Award in 2022.