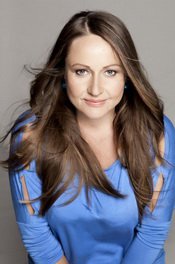 Born in the town of Tiszaújlak (Vylok), just across the Ukrainian border from Hungary, Nelli Szűcs obtained her acting degree from Kiev's Karpenko-Kari National University of Cinema and Drama in 1992. Between 1993 and 2006, she was a member of the company of the Illyés Gyula National Theatre in Beregszász (Berehove), before spending the years from 2006 to 2013 with the Csokonai Theatre of Debrecen. She has been one of the artists at the Budapest's National Theatre since 2013. Her career has yielded numerous awards, bringing her the Mari Jászai Award in 2007, the award of the jury of actors from the MASZK National Actors' Association at the Pécs National Theatre Festival in 2010, the Amphiteátrum Award in 2012, the Hungarian Arts Award in 2013, when she was always named an Artist of Merit, and the Éva Szörényi Award in 2016. She has worked with many directors over the past two decades, including Attila Vidnyánszky, László Bérczes, Sergey Masloboischykov, Victor Ryzhakov, Valère Novarina and Andrei Bubien.