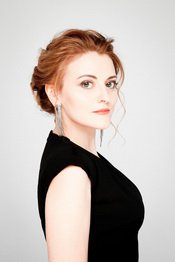 Ukrainian singer Tetiana Zhuravel graduated from the Petro Tchaikovsky National Music Academy of Ukraine in 2013, where she also later did three years of post-graduate study. She has made successful appearances in numerous singing competitions, taking third prize at the International Young Opera Singers Competition in Donetsk in 2013 and both second prize and the audience prize at the First International Éva Marton Singing Competition in 2014. In 2017, she won another audience prize at the First International Virgilijus Noreika Competition for Singers in Vilnius, followed by yet another at the Grandi Voci competition in Salzburg the next year. During her studies, she was a member of the Tchaikovsky Music Academy’s opera studio, where the roles she sang included Marfa in Rimsky-Korsakov’s opera The Tsar’s Bride and Gilda in Rigoletto.
Since December 2016, she has participated in several of the Hungarian State Opera’s productions, singing here the Queen of the Night, Violetta in La traviata, and Sierva María in Péter Eötvös’s opera Love and Other Demons. She has also taken the stages of the Lviv National Academic Opera, also as the Queen of the Night, of the Kiev National Theatre of Operetta, as Rosina in Il barbiere di Siviglia, and of Open Opera Ukraine, as Belinda in the opera Dido and Aeneas.
In 2017, in Brussels, she sang the soprano solo part in Ligeti’s Requiem alongside the Orchestre National de Belgique and the Hungarian National Choir. The following year, she portrayed Zerlina at Operafest-Tulchyn, with Oksana Lyniv conducting. She also sang the Queen of the Night again in a new production directed by Graham Vick at the Macerata Opera Festival and under the baton of Lothar Koenigs at Valencia’s Palau de les Arts Reina Sofía.