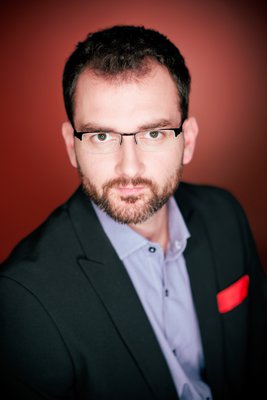 The young tenor, Péter Balczó – born in 1983 – brings a strong yet flexible and lyric voice and his strong stage presence to his performances. His exceptional acting skills – so rare in the genre of opera – make Péter one of the most talented artists of his generation.

Péter completed his university studies in Debrecen, under the tutelage of Professor Éva Mohos-Nagy. After graduation, he took master classes with Mirella Freni and Dénes Gulyás. He began his career as an opera singer in the same city, in Debrecen; he performed his first operatic roles at Csokonai Theatre. In 2010, he won the shared second prize at the Armel Opera Competition for his performance of La Traviata. After this career breakthrough, multiple opportunities to sing principal roles at the opera and operetta productions of several Hungarian theatres followed.

From his debut at The Hungarian State Opera in 2012 in the role of Alfredo (Verdi: La Traviata) to many other opportunities later, Péter performed principal and title roles in new premieres and repertoire pieces. He has a great professional flexibility, by virtue of which he is often invited to perform classical opera roles like Pinkerton (Madama Butterfly), László Hunyadi (Hunyadi), Belmonte (The Abduction from the Seraglio), Fenton (Falstaff), Nemorino (The Elixir of Love) Edgardo (Lucia di Lammermoor), as well as contemporary works, e.g. Tom Rakewell (The Rake's Progress), Ferdinand (The Tempest), Sporting Life (Porgy and Bess), and also experimental performances like Kornélis (The Yellow Princess) or Fred (The Respectful Prostitute) in the opera series Late Night of the Liszt Academy of Music. He is often asked to perform smaller character roles as well, e.g. Nick (The Girl of the Golden West), Az ifjú jelenése (The Woman Without a Shadow), Beppo (Pagliacci), Rinuccio (Gianni Schicchi) vagy Ottó (Bánk bán).

Apart from Budapest, the capital city, Péter is a frequent guest artist in other cities of Hungary, performing regularly in Szeged, Debrecen and Szombathely as well. He participated in productions of the first three years of the Co-Opera company: The Barber of Seville, The Marriage of Figaro and The Abduction from the Seraglio.

Péter also enjoys exploring the world of operetta. He made his debut at the Budapest Operetta Theatre in 2015 in J. Strauss: The Bat, but he performed Prince Szu-Csong in The Land of Smiles and Edvin in The Gipsy Princess as well.

Péter has worked with the most renowned Hungarian directors, such as András Almási-Tóth, Ferenc Anger, Pál Göttinger, Tamás Juronics, Miklós Gábor Kerényi, Vajk Szente, Kriszta Székely, János Szikora, Miklós Vecsei H., and many more. He was invited to perform together with such world-class singers as Leo Nucci, Aleksandrs Antonenko, Marcello Alvarez, Marcello Giordani, Kristian Benedikt, Gaston Rivero, Elena Mosuc, Kurt Ridl, Edita Gruberova; and been invited to give performances in Switzerland, Slovakia and Slovenia. He has participated at several opera tours abroad, e.g. in 2013 in Oman, in 2015 in Japan and in 2017 in Israel.

Budapest audiences have seen two of his individual recitals with a selection of his varied, ever-growing repertoire.