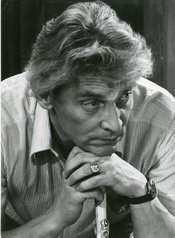 (1927-2015)
The doyen of the Hungarian directors was born in Debrecen in 1927. After graduating from the Academy of Drama in 1949 he signed a contract with the National Theatre. Between 1951 and 1955 he worked as a principal director of the Katona József Theatre, Kecskemét, from 1955 to 1960 he was a member of the Ifjúsági and József Attila Theatres and the Szeged National Theatre. He has been a lecturer at the Academy of Drama since 1958. He became a director in the Opera House in 1960, worked as a principal director from 1987 to 1990, and is presently an titular principal director. He has staged 47 pieces of various styles in the Opera House since 1962, including operattas (Millöcker: Der Bettelstudent) and singspiele (Kodály: Háry János) and Italian (Verdi: Nabucco), German (Beethonven: Fidelio), Russian (Tchaikovsky: The Queen of Spades), Hungarian (Bartók: Bluebeard's Castle), Czech (Janáček: Jenůfa) and English (Purcell: Dido and Aeneas) operas as well as a re-discovery of a Baroque piece (Händel: Rosalinda) and the première of a contemporary opera (Vajda: Mario and the Magician). Professor emeritus András Békés is a Master Artist of the Hungarian State Opera House.