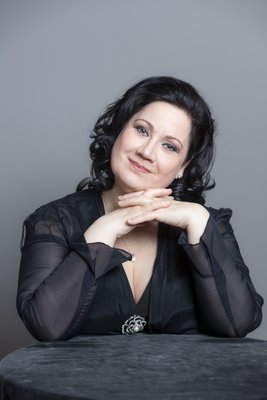 Csilla Boross earned her first degree at the Ferenc Liszt Academy as a piano teacher, followed by another in solo voice. Her teachers included Judit Németh, Boldizsár Keönch, Ilona Tokody and Gabriella Imre. She has been a permanent guest artist at the Hungarian State Opera since 2003. Starting in 2008, she spent several years as a member of the Janácek Opera in Brno, where here roles included Tatiana (Onegin), Venus (Tannhäuser; she also sang the role on a tour of Japan in 2008, including at Tokyo's Bunka Kaikan Opera), as well as the female leads in La traviata, Tosca, Macbeth, Madama Butterfly, Nabucco and Aida. As a guest singer a Prague's National Theatre from 2009, she took the stage as Elettra (Idomeneo), Fiordiligi (Così fan tutte), Donna Anna (Don Giovanni), Tosca, Aida and Abigaille (Nabucco). In 2010, she received the Thalia Award 2009, the Czech Republic's most prestigious cultural honour in the opera category, for her portrayal of the title role in Madama Butterly. In 2010 she was also honoured with the Diva Award 2009, the Brno theatre's professional distinction. Her international career was launched in 2010, when she made her debut in Trieste as Violetta in La traviata, and later sang Abigaille in Nabucco at the Palm Beach Opera in Florida. She also sang Abigaille in Rome in 2011, on the 150th anniversary of Italian unification, with Riccardo Muti conducting. She garnered huge acclaim in 2011 in the female leads in Manon Lescaut in Montpellier (directed by Jean-Paul Scarpitta), in Tosca at Rome's Caracalla Baths (directed by Arnaud Bernard), and in Macbeth in Modena (conducted by Aldo Sisillo). In 2012, she sang the roles of Sister Angelica (in Suor Angelica) and Giorgetta (in Il tabarro) at Opera de Lyon, in a production staged by David Pountney. She also again found great success in the role of Abigaille, this time in Washington (with Philippe Auguin conducting) and Philadelphia (in a production directed by Thaddeus Strassberger). In 2011, she took the stage as Aida at the Savonlinna Opera Festival, in the title role of Hindemith's Sancta Susanna in Ravenna under the baton of Riccardo Muti, and also sang Tosca at the Macao International Music Festival, with Lü Jia conducting. 2013 saw her debut in four new principal Verdian roles. First, as Lucrezia Contarini (I due Foscari), conducted by Riccardo Muti in Rome. Second, as Amelia (Un ballo in maschera) in a Melbourne co-production with La Fura dels Baus and conducted by Andrea Molino, in which her portrayal won her the highly prestigious Green Room Award in 2014. Third, as Odabella (Attila) in Shanghai, with Daniel Oren conducting. And fourth, singing Verdi's other Amelia (in Simon Boccanegra) at the Hungarian State Opera. The Savonlinna audience got to hear her again in 2013, this time in the role of Lady Macbeth, as did the Palm Beach Opera's audience in 2014. She sang the role of Abigaille in Pisa in 2013 and in Geneva in 2014, under the baton of John Fiore, and would also take the stage of the Hungarian State Opera House as Tosca, singing alongside José Cura. In the summer of 2014, she made her debut in the title role of Norma in Palermo, and then jumped in with a bravura performance as Maddalena to save the Peralada Opera Festival's premiere of Andrea Chénier, with Marco Armiliato conducting. In Budapest, after portraying both of the female leads (Venus and Elisabeth) in Tannhäuser, she debuted her Aida at both the Hungarian State Opera House and the Teatro dell'Opera di Roma in the spring of 2015. In that same year, she sang the soprano part of Verdi's Requiem at Amsterdam's Concertgebouw, with Marc Albrecht conducting. She then went on to sing Abigaille in Pittsburgh, and also made her debut as Elisabeth in Don Carlos in Budapest. She sang Leonora (La forza del destino) in Geneva under the baton of Paolo Arrivabeni, Lady Macbeth in Marseille under Pinchas Steinberg, and Abigaille in Rome under John Fiore. In 2016 she received the Knight's Cross of the Order of Merit of the Republic of Hungary in recognition of the notable successes her singing had enjoyed on stages both in Hungary and abroad.