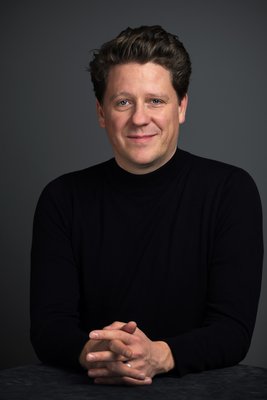 Conductor and composer Ádám Cser graduated with honours from the Academy of Music in András Ligeti’s class in 2010 while also attending the University of Music and Performing Arts Vienna as an Erasmus student, studying under Mark Stringer. In July 2008 and 2011, he participated in the conductor master courses held by Zoltán Peskó and was an active participant in Péter Eötvös’s master course in the summer of 2009. He has been composing music since the age of 11. Cser’s works include mainly pieces written for choruses, chamber orchestras, and symphony orchestras. His pieces Qu-ia... Lux aeterna and Psalmus 70 have been released on disc. In February 2018, his Symphony No. 5, performed with the Budafok Dohnanyi Orchestra, was met with great success. He finished his 6th symphony in May 2021 on commission from the Miskolc Symphony Orchestra.
Cser has been Music Director at the Miskolc National Theatre and a conductor for the Szolnok Symphonic since 2012, and has been a guest conductor at the Hungarian State Opera since 2018. Work in recent years has included the Hungarian Radio Symphony Orchestra, the Miskolc Symphony Orchestra, Concerto Budapest, Danubia Orchestra Óbuda, and the State Philharmonic of Tîrgu Mureș. He has been a regular participant at the Miskolc Bartók Plus Opera Festival, both as a conductor and a director. In 2021, he has continued work as director of the Savaria Symphony Orchestra and the Alba Regia Symphony Orchestra.
In April 2011, from 170 applicants and 7 selected participants, he was invited to conductor Bernard Haitink’s conducting masterclass at the Lucerne Spring Festival to conduct the Lucerne Festival Orchestra; in July, he conducted the Case de Musica orchestra in Porto under the direction of Jorma Panula. In May 2011, he was awarded 11th place at the Memphis International Conducting Competition and was invited to participate in the May 2012 Malko Competition for conductors as well as in the final round of the Donatella Flick Conducting Competition in September 2012. He has worked as an assistant at the Bergen Philharmonic Orchestra and the BBC Orchestra in Manchester. In December 2016, he worked with the Budapest Festival Orchestra as assistant to conductor Iván Fischer, directing the soloists Leonidas Kavakos and Daniel Barenboim. He has conducted and acted as musical director for a number of theatrical productions. He debuted at the Hungarian State Opera with Marschner’s opera The Vampire, and has been a regular presence at the Opera ever since. He was a finalist in the 2017 Maestro Solti International Conducting Competition. Cser has been recognised with a number of special prizes and has inherited János Ferencsik’s baton.