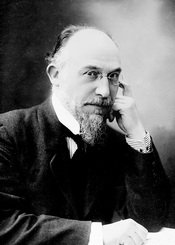 (1866-1925)
Erik Satie's family moved to Paris when he was four years old, but after the death of his mother and sister he wound up in the home of his grandparents in Honfleur, the city that served as his home for his early years. It was there that he received his initial music lessons from organ and chorus leader Gustave Vinot in 1874. His father's second wife was a composer who noticed Satie's musical talent and enrolled him in the Conservatoire de Paris in 1879. Nevertheless, Satie abandoned his studies after two and a half years.
He started to compose in 1884, and four years later wrote his famous Gymnopédies piano pieces. In 1892, he wrote his orchestral piece Trois sonneries de la Rose+Croix for one of the secret “Rosicrucian” societies, of which Satie, like Debussy, was a member for some years.
In 1887, after a period of volunteer military service, Satie moved to the artistic quarter of Montmarte, where he found a job as the pianist in the cabaret Le Chat Noir.  In 1898, he moved to the community of Arcueil, next to Paris. At the age of 40, he again set about continuing his music studies, this time studying composition and counterpoint at the Schola Cantorum under teachers Vincent d’Indy és Albert Roussel.
Deeply interested in the fine arts, he formed close friendships with many figures from the avant garde, including Pablo Picasso, Georges Braque and Jean Cocteau. From 1911, he started to make a greater name for himself when Debussy and Ravel began performing his pieces. He drew the notice of Paris in 1917 with the premiere of the ballet Parade. Satie was a precursor of minimalist music, and his works have been used in more than one hundred films.