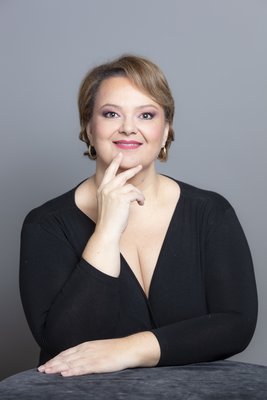 She began her singing studies with Kázmér Sárkány, and continued with Elisabeth Szemző-Goese in Koblenz. After returning to Hungary she studied with Margit Ercse, and later graduated from Liszt Ferenc Academy of Music as a student of Júlia Pászthy. She continued her postgraduate studies in Graz and Vienna with David Lutz and Franz Lukasowsky. She was a member of the studio of the Opera House from 2004 to 2006, and has been a permanent guest singer ever since. She debuted here in the role of Donna Elvira in Mozart's Don Giovanni and as Fiordiligi in Così fan tutte. In 2005, she sang the title role of Verdi's Alzira at the Academy of Music, and appeared as Donna Anna at the Mozart Marathon of the Budapest Spring Festival. She is mainly at home in Mozart's roles, but she has also appeared on concert stages including the Wiener Musikverein in Verdi's Requiem, and the Styriarte Festival in Graz in Dvořák's Requiem. Received the György Melis Award during the 2015/16 season.