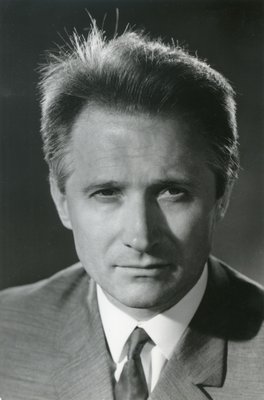 (1925-2000)
Gábor Forray was born in Székesfehérvár and pursued his studies at the Academy of Arts and Crafts between 1946 and 1950. Later on, in 1956, on a designer's scholarship at the Hungarian State Opera, he worked as assistant to Gusztáv Oláh. He was a set designer at the Opera until 1967, when he was named chief set designer, a post he held until 1974. He then served as scenic manager and technical director until 1989, the year of his retirement. He regularly created designs for both theatres in Hungary and opera houses abroad. He also frequently participated in exhibitions, including at the Miskolc Triennial and in Budapest. His works combined constructivism and picturesqueness through the application of new materials and technical solutions, with craftsmanship that was characterised by great manual skill and a superb sense of colour. He also worked as a painter and applied artist. He worked as a guest director in the Soviet Union, Austria, Australia and Germany.
Of his set designs, those that are currently, or have recently been shown at the Opera House are ones for four ballets choreographed by László Seregi: Bartók's The Wooden Prince (1998), Delibes's Sylvia (1972), Mendelssohn's A Midsummer Night's Dream (1989) and Prokofiev's Romeo and Juliet – as well as for two operas: Verdi's Don Carlos (1969-2001) and Wagner's Parsifal (1983).