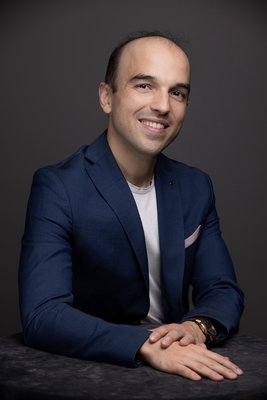 Máté Hámori is a prominent member of the younger generation of Hungarian conductors. He earned his diploma from the conducting department of the Ferenc Liszt Music Academy in 2006. In 2003 he founded the Teatro di Musica chamber orchestra, with which he gave numerous concerts and also launched several subscription series. Since 2005 he has conducted most of Hungary's symphony orchestras, and is a recurring guest at the Philharmonic Orchestra of Győr and the Miskolc Symphony Orchestra. Since 2012 he has been permanent conductor of the Szolnok Symphony Orchestra, and since 2009, as assistant to Tamás Vásáry, helps run the Zoltán Kodály World Youth Orchestra. He has appeared in France, Italy, the Czech Republic and Romania, and his partners have included Andrea Rost, Tamás Vásáry, Lajos Lencsés and András Csáki. He made his debut at the Erkel Theatre in May of 2013 conducting the opera Hunyadi László. After that, in November of the same year, he also conducted the Budapest Opera House's premiere of Britten's The Rape of Lucretia.
He considers playing 20th century and contemporary music to be of critical importance, and he has been involved in the commissioning and premiering of numerous new works, including ones by Márton Kerékfy, Árpád Kákonyi, Péter Zombola and Balázs Horváth. At the Budapest Mini Festival in January of 2013, he premiered one work by each Máté Hollós and Iván Madarász with the Philharmonic Orchestra of Győr, to great acclaim. In addition to contemporary music, he also attaches key importance to the musical education of youth. Since 2006, he has conducted several hundred school and youth concerts in the most diverse possible locations and venues, from the Great Hall of the Liszt Music Academy to the cultural centres of villages with only a few hundred inhabitants. In this way he has presented numerous operas to children, including works by Donizetti, Mozart and Haydn. He has been involved with developing several new types of concert formats for young audiences. For example, he has created new text in verse for Benjamin Britten's A Young Person's Guide to the Orchestra and, as part of a programme constructed around works by Bartók and Revel, combined the contemporary fable with live sand animation. He has been the artistic director of the Danubia Orchestra Óbuda since September 2013.
In recognition of his outstanding work, he was awarded the Hungarian Gold Cross of Merit, civil division, in 2017 and the Liszt Award, in 2019.