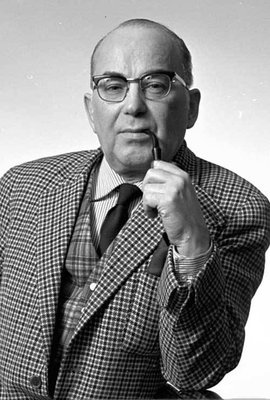 
(1905–1971)
Harald Lander was born in Copenhagen in 1905 and started his ballet studies at the Danish Royal Ballet School in 1913. In 1923, he joined the Danish Royal Ballet, where he made his debut as a soloist in Auguste Bournonville's ballet Far from Denmark.
Lander left Denmark in 1927 in order to study with Mikhail Fokin in New York. Returning to Copenhagen in 1929, he rejoined the Danish Royal Ballet, where he became a soloist and danced principal roles until 1945. His dance technique was defined by the Cecchetti method, meaning the highest level of virtuosity in the Western ballet world. Serving as the institution's artistic director between 1932 and 1951, he established a place for Fokin's choreographies in the Danish repertoire (such as Petrushka and Le Spectre de la Rose) and himself created more than 30 pieces for the ensemble, including Football (1933), Bolero, (1934), The Seven Deadly Sins (1936) and Valse Triste (1949). He also attached great importance to preserving and nurturing the legacy of Bournonville, and did a great deal to keep the older Danish choreographer's works (such as Napoli, La Sylphide, Konservatoiret and Flower Festival in Genzano) alive.
In 1964, after a spending a decade (1953-63) serving as ballet master for the Ballet de l'Opéra national de Paris, he opened his own studio in the French capital. He created choreographies for many companies and theatres, including Milan's La Scala, the American Ballet Theatre, the London Festival Ballet, Rio de Janeiro's Teatro Municipal, the Dutch National Ballet, the operas of Hamburg, Munich and Vienna, the Finnish National Ballet and the Paris Opera Ballet.
He returned to Copenhagen in 1971, shortly before his death.
His most famous ballet, Etudes, remains in the repertoires of numerous major ballet companies in Europe and the United States, and even in Australia.