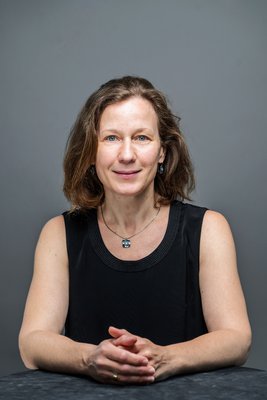 Born in Pécs in 1975, Mária Harangi studied Hungarian and French at Eötvös Loránd University's Faculty of Humanities, and then earned her degree in directing at the University of Theatre and Film Arts upon completing the specialised musical drama course headed by Miklós Szinetár. Her teachers were Emil Petrovics, András Békés, János Ács, Gábor Székely and Miklós Gábor Kerényi. As her diploma production, she presented Donizetti's comic opera Rita at the Millenáris Theatre, while writing her thesis, titled Music is Half the Battle, on possible applications of musical prose and musical theatre. After co-directing two works (Hunyadi László and Rigoletto) with Miklós Szinetár at the Opera House, she made her debut with Levente Gyöngyösi's opera The Stork Caliph. She has directed in different genres of musical drama. In opera, she staged Gianni Schicchi as an examination production, and also created Il trovatore (Szeged), The Spinning Room (Debrecen), Das Dreimäderlhaus (Veszprém), The Seagull (at the Mezzo Opera Competition and Festival in New York), as well as a non-traditional production of The Magic Flute with the HOPPart Company. She has directed both classic musicals and ones that bring innovation to the genre, including productions of West Side Story, Man of La Mancha (Eger), I Love You, You're Perfect, Now Change!, Avenue Q (Central Theatre), Group Therapy, The Vulture (Madách Theatre) and Into the Woods (Hungarian Theatre of Pest), as well as a staging of The Attic that served as the opening production for Tatabánya's theatre. She conducted her first classical operetta, Baroness Lili, in Kecskemét in 2009, following up with Miska the Magnate in Zalaegerszeg in 2010. Classical dramas she has presented are A Streetcar Named Desire (2010) and Closed Proceedings (2011), both staged in Székesfehérvár. She regularly develops puppet and children's theatre productions, including Dream, Dream, Dream With Me and Society of Stags (a version of Bartók's Cantata Profana aimed at young viewers) in Veszprém; World of Worlds; Sir Star – Adventures in Ihajcsuhajdia, Cold Heart and The Boatman of the Moon in Szombathely; Mr A's Amazing Maze Plays in Székesfehérvár; and Pinocchio, or Once upon a time there was a piece of wood at the Colibri Theatre. The HOPPArt Company has been performing her production of Did I ever tell you the one about... for three consecutive years, with great success. She gained her DLA in 2020 in the doctoral programme of the University of Theatre ad Film Arts. The subject of her dissertation was the curriculum development of tertiary musical theatre director training. She is the mother of three. She is married to theatre director and set designer Gergely Romvári.
She has been the artistic assistant of the Opera House since 2016. She directed János vitézke, a piece compiled from the works of Petőfi and Kacsóh, played on the Bánffy Stage of the Eiffel Art Studios.