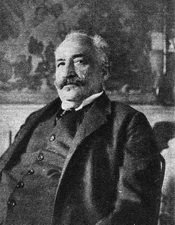 
(1839-1921)
Ignaz Schnitzer was an Austrian journalist, writer and librettist. After studying philosophy, he went on to work as a newspaper journalist in Pest. He later lived both in Budapest and in Vienna, working as a journalist and editor. He translated Hungarian pieces, including the works of Ede Szigligeti and Mór Jókai, for German theatres, in addition to translating the works of Sándor Petőfi into German. In 1881, he moved to Vienna, where he worked as a librettist and literary translator. His friendship with Johann Strauss led to the creation of the libretto for Der Zigeunerbaron. He is buried in Budapest.