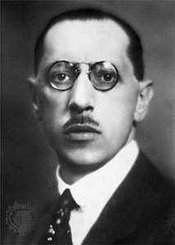 (1882-1972)
Born in the Russian town of Oranienbaum, Stravinsky became a citizen of France in 1934 and of the United States in 1945. His father was a famous bass in Saint Petersburg. He studied law in the Russian capital from 1901, but pursuing his true interest he spent a great deal of time engaged with music throughout this period. He started to study under Nikolai Rimsky-Korsakov in 1903, thus mastering music composition as a private student. When his short symphonic pieces Feu d'artifice and Scherzo fantastique  were premiered in Saint Petersburg in 1909, Sergei Diaghilev was among those attending the concert. Afterwards, he asked Stravinsky to write the music for a ballet treating the legend of the firebird. The success of this piece brought Stravinsky world fame in 1910. This was followed by Petrushka (1911) and The Rite of Spring (1913), by which point Stravinsky was considered one of the leading lights of the musical avant garde. Losing his property as a result of the Russian Revolution in 1917, the then began to write works for smaller-scale ensembles. This gave rise to his L'Histoire du soldat (1918), in which he managed to combine his two principal areas of interest: the rhythms of Russian folk music and American jazz.
He wrote his ballet Pulcinella, created for Diaghilev in 1920s, based on music ascribed to Pergolesi, thus beginning Stravinsky's neo-classical period. His last pieces of obviously Russian music from this period were the ballet Les noces and the opera Mavra. After settling in France, he wrote a series of work that evoke the 18th century, but are unmistakably clad in 20th-century harmonic and rhythmic styles. Stravinsky's most outstanding creative works in this vein were his piano concerto, the Capriccio for piano and orchestra, his violin concerto, the ballet Apollon musagète, the Symphony in C major and, most of all, in his opera The Rake's Progress. At the same time, in its melodiousness, his opera-oratorio Oedipus Rex (1926-7), written to text by Jean Cocteau, was reminiscent of the 19th century and Verdi.
In 1939, Stravinsky took up residence in the United States, spending most of his time in Los Angeles, where the climate was more favourable for coping with the tuberculosis he had meanwhile been diagnosed with. His first significant “American” work was his Symphony in 3 Movements from 1945. Another turning point came with the 1947 ballet Orpheus, which sparked Stravinsky's analysis of Monteverdi. He was also influenced by meeting American conductor Robert Craft, who was enthusiastic in his interest in both the Baroque and the Second Viennese School centred around Arnold Schönberg.
Stravinsky later exhibited an interest in the serialism of Webern, and at Craft's urging the signs of the new movement also began to appear in his works. Attesting to this are his Canticum Sacrum (1955), Threni (1958), the ballet Agon and Movements for Piano and Orchestra.
In 1962, he accepted an invitation from the Soviet Union to perform a concert series there, which took him to Leningrad and Moscow and led to meetings with Shostakovich and Khachaturian. In his final years, he principally wrote short, streamlined works, frequently with a religious feeling and form. At his request, he was buried in Venice, on the island of San Michele, close to the grave of Sergei Diaghilev.