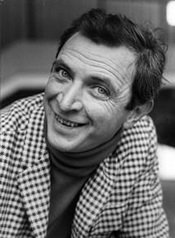 (1927-1973)
John Cranko was born in 1927 in Rustenburg, South Africa. He received his dance education mainly at the University of Cape Town, where he also choreographed his first ballet to Stravinsky’s Suite from The Soldier’s Tale. In 1946, he continued his studies at the Sadler’s Wells School in London and shortly afterwards became a member of the Sadler’s Wells Ballet (subsequently The Royal Ballet). In 1947, Cranko made a sensational choreography to Debussy’s Children’s Corner for the Sadler’s Wells Ballet; from 1949 on he devoted himself exclusively to choreography, producing extremely successful ballets - mostly for the Sadler’s Wells Ballet. In 1955, he choreographed La Belle Hélène for the Paris Opera Ballet and in 1957 he created his first full-length ballet, The Prince of the Pagodas, for The Royal Ballet. In 1961, he was appointed ballet director in Stuttgart by Walter Erich Schaefer, the General Director of the Wuerttemberg State Theatre (today’s Stuttgart State Theater). At the beginning of his time in Stuttgart, Cranko created short ballets and gathered together a group of dancers, among whom were Egon Madsen, Richard Cragun, Birgit Keil and, most importantly, a young Brazilian dancer named Marcia Haydée who was to become his prime muse and inspiration. The breakthrough for Cranko came in December 1962 with the world premiere of Romeo and Juliet, which was highly praised by critics and audience alike. In Stuttgart, Cranko created many small choreographic jewels such as Jeu de cartes and Opus I, as well as his symphonic ballet Initials R.B.M.E., but it was with his dramatic story ballets such as Onegin, The Taming of the Shrew, Carmen, Poéme de l’Extase and Traces that Cranko secured his place in the pantheon of great choreographers. In addition, he encouraged young dancers in his company - including Jiry Kylián and John Neumeier - to try their hand at choreography. He died unexpectedly at age 45 in 1973.