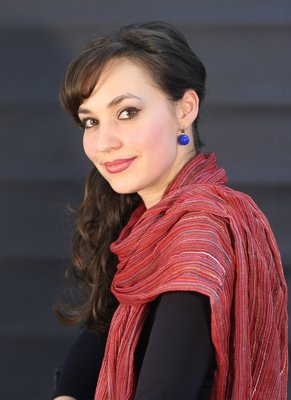 Brigitta Kele started developing her vocal skills in the city of her birth, at the University of Oradea’s Faculty of Music. In the beginning, she used her skills as a chorus member for the Hungarian Opera in Cluj Napoca. Thanks to her exceptional soprano voice, she has been singing solo roles for the Hungarian Opera in Cluj Napoca since 2007 and has become one of the most renowned and popular artists in the city, where she has, among others, performed the roles of Pamina (Mozart: Die Zauberflöte), Arminda (Mozart: La finta giardiniera), Mimi and Musetta (Puccini: La bohème), Micaëla (Bizet: Carmen), Amélia (Verdi: Un ballo in maschera), Odabella (Verdi: Attila), Donna Elvira (Mozart: Don Giovanni), Nedda (Leoncavallo: Pagliacci), and Young Girl (Kodály: Székelyfonó). Transylvanian and Hungarian audiences have also celebrated her as the prima donna in a number of operettas, such as Csárdáskirálynő (The Gipsy Princess), Ball im Savoy, A víg özvegy (The Merry Widow), and Der Zigeunerbaron. Kele has also been featured in countless contemporary opera roles: Selmeczi: Szirén (The Siren), Bizánc: Iréne, and Levente Gyöngyös: The Stork Calif.
Her career has won her the German DEBUT International Classical Singing Competition award (2006), the Ágnes Kriza Award conferred by the Hungarian Opera in Cluj Napoca (2007), an Award of Excellence at the National Opera Gala Bucharest (2016), and the Award for Transylvanian-Hungarian Contemporary Culture (2017). Starting from 2012, she worked as a guest solo singer and became a company member of the Düsseldorf Opera, where her roles included Mimi (La bohème), Nedda (Pagliacci), Lauretta (Gianni Schicchi), Donna Elvira (Don Giovanni), Countess (Le Nozze di Figaro), Violetta Valery (La traviata), Liú (Turandot), Micaela (Carmen), and Desdemona (Otello)
In recent years, she has performed in famous opera houses such as the New York Metropolitan, where she was radiant in the role of Musetta (Zeffirelli’s 1982 version of La bohème), the Opéra Bastille in Paris, where she sang the role of Nedda (Pagliacci) and Musetta, and performed the roles of Nedda and Mimi at the Opera d’Avignon. She was invited to the Opéra national du Rhin in Strasbourg to sing Suzel (Mascagni: L’amico Fritz), Nedda (Leoncavallo: Pagliacci), and Cio-cio-San(Puccini: Madama Butterfly), and was also a guest at the NCPA in Peking and the Masada Festival in Israel (Micalea - Carmen).
She has worked together with famous opera directors such as Giancarlo del Monaco, Vincent Boussard, Andreas Homoki, Kristian Fredrick, and the film director Mariano Pensotti.
Famous conductors she has performed under include Daniel Oren, Marco Armiliato, Giordano Bellincampi, Enrico Dovico, Antonino Fogliani, Daniele Callegari, Paolo Carignani, Farbrizio Maria Carminati, and Giuliano Carella.