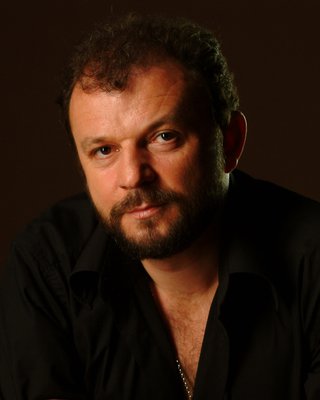 Transylvanian-born tenor Atilla Kiss B. earned his degree in voice and voice pedagogy from the Gheorghe Dima Academy of Music in Kolozsvár (Cluj-Napoca) in 1996, and later continued his professional training at the Mozart Academy in Prague and at Luxembourg's Conservatoire de Musique. He was a soloist at the Kolozsvár Hungarian Opera from 1993 until 1999, when he joined the Hungarian State Opera, again as a soloist. In 2000, he took first place at the Traian Grozăvescu International Tenor Competition.
He has been involved in numerous world premieres and new productions at the Opera House, and has sung the title roles in Katharina Wagner's production of Lohengrin, Csaba Káel's Bánk bán, as well as of Andrea Chénier, Hunyadi László, Don Carlos and Stiffelio. He sang the role of Adam in the world premiere of Attila Bozay's The Last Five Scenes, and was the first to sing Satyavan in Sándor Szokolay's opera Savitri. From Tokyo to Toronto, he is a regular guests at many of the world's leading opera stages and concert podiums.
His major appearances include performing as Turiddu (in Cavalleria rusticana in Tokyo and Berlin), Dick Johnson (in La fanciulla del West in Tokyo), Don José (in Carmen in Toronto), Števa Buryja and Laca Klemeň in (in Jenůfa in Barcelona and Monte Carlo, respectively), Albert (in The Makropulos Affair in Nantes, Angers and Paris), Radames (in Aida in Ljubljana and Bilbao), Kalaf (in Turandot in Bucharest) and Cavaradossi (in Tosca, also in Bucharest).
At Castel Gandolfo, the papal summer residence, he sang the tenor solo in Bach's Magnificat in honour of Pope John Paul II, and he has also sung the tenor solo in Kodály's Psalmus Hungaricus at Vienna's Musikverein. He has also sung this part several times in Kecskemét, including at the concert series celebrating the 125th anniversary of the composer's birth, as well as at the Opera House with Tamás Vásáry conducting and at Müpa Budapest under the baton of Zoltán Kocsis. He is a regular guest at the Miskolc Opera Festival, the Gyula Castle Theatre, as well as at the Margaret Island, Bakáts Square and Szeged open-air festivals. He first partnered with Éva Marton in Csaba Káel's film version of Bánk bán, and has since also sung together with the soprano in Lohengrin and Jenůfa. He has been an appointed lecturer at the Faculty of Arts at the University of Pécs since 2012 and is a member of the Hungarian Academy of Arts. His opera singing has earned him the Ferenc Liszt Award, the Artisjus Award and the Kossuth Prize, among other recognitions.