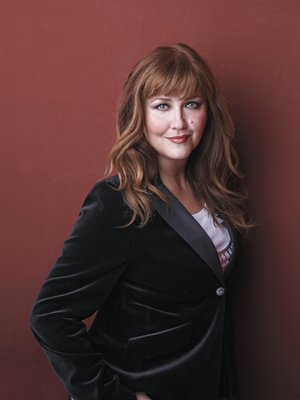 Klára Kolonits was born in Budapest. She earned her diploma in solo voice from the Ferenc Liszt Academy of Music's Budapest Pedagogical Institute and later joined the Csokonai National Theatre of Debrecen. Her early roles included Nannetta (Falstaff), Countess Almaviva (Le Nozze di Figaro), Olympia/Giulietta/Antónia (Les contes d'Hoffmann), Fiordiligi (Così fan tutte), and the Queen of the Night (Die Zauberflöte). She has won awards at numerous international singing competitions, and was named the Hungarian State Opera's female soloist of the year in 2002. A partial list of her roles on the Budapest stage includes Donna Anna (Don Giovanni), Fiordiligi (Così fan tutte), Konstanze (Die Entführung aus dem Serail), Fauno (Ascanio in Alba), the Queen of the Night (Die Zauberflöte), Giulietta (I Capuleti e i Montecchi), Violetta (La traviata), Odabella (Attila), Gilda (Rigoletto), the title role of Luisa Miller, Melinda (Bánk bán) and Erzsébet Szilágyi (Hunyadi László). She has made guest appearances as Violetta in Pozsony (Bratislava), Ljubljana, Eszék (Osijek), Ostrava, Debrecen, at the the Schloss Kirchstetten Festival and in Szombathely, as Gilda in Kolozsvár (Cluj-Napoca) and Miskolc, as Odabella at Budapest's BudaFest and in Miskolc. Other guest appearances includes singing the three loves of Hoffmann in Szolnok, Brno, Gijón and at the Miskolc Opera Festival, Elvira in I puritani in Zamárdi, the title role of Lucia di Lammermoor in Szombathely and at the Ferencváros Summer Festival on Bakáts Square, the title roles of Beatrice di Tenda and Lucrezia Borgia in Copenhagen, Donna Anna in Prague, Brno, Zagreb and Kassa (Košice) and at the Gars am Kamp Open Air Festival, and the Queen of the Night in Amsterdam, The Hague, Weimar and Linz and at the Savonlinna Opera Festival, where she sang the part in Finnish.
Her concert repertoire ranges from Mozart (“Popoli di Tessaglia”, “Vorrei spiegarvi o Dio“, “No, che non sei capace“, “Exsultate, jubilate” and others among his concert arias and ecclesiastical works) and Handel (the Angel from Le resurrezione and Messiah), through Verdi's Requiem and concerts of songs sung in their original languages, to contemporary music (Kurtág, Eötvös, Boulez). She has taken part in the Hungarian premieres of works by Dániel Dinyés, Jörg Widmann and Gija Kantscheli, among others. In 2009, Hunnia Records released her album of songs by Liszt, which was nominated for a Fonogram Award. She received the Ferenc Liszt Award in 2010. In 2013 she was named a Chamber Singer of the Hungarian State Opera. Her solo album of arias Bel Canto Reloaded came out in December of 2014, featuring the Hungarian Studio Orchestra under the baton of Dániel Dinyés. Following on the heels of its universally enthusiastic critical reception, the recording has expanded the audience's interest in its bel canto pieces. She received the Mihály Székely Commemorative Plaque in 2016.

NEW YEAR'S AT THE OPERA HOUSE