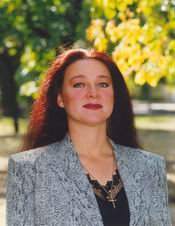 After learning to play the piano and the clarinet, she studied singing at the Secondary School of Music in Pécs, and later graduated as a performing artist, concert singer and singing teacher from Liszt Ferenc Academy of Music, Budapest. In 1990, with her final examination performance of her opera singer studies she was admitted to the Hungarian State Opera House, and has been one of the most frequently heard altos of the theatre ever since. Her main roles include Judit (Bluebeard's Castle), Carmen, Landlady (Spinning Room), Mother (Blood Wedding), Klytaemnestra (Elektra), Ulrika (Un ballo in maschera), Erda (Das Rheingold, Siegfried), Waltraute (Die Götterdämmerung). She often participates in premières of contemporary pieces; one of her greatest successes was the Hungarian première of György Ligeti's Le Grand Macabre. She often appears in concerts, her repertoire ranges from Bach to contemporary pieces.