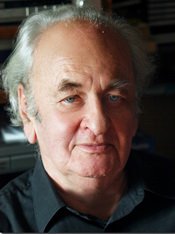 (1928-2016)
Kamilló Lendvay was admitted to the Ferenc Liszt Academy of Music in 1949, where he studied composition with János Viski until 1957, while also learning conducting from László Somogyi and piano from György Kósa, Zdenka Ticharich, György Ferenczi and Béla Ambrózy. Outside of his studies, he played at dances in a Dixieland band and played piano in Budapest's City Park. In 1957, he became conductor, répétiteur and later head of the opera company and chorus at the National Theatre of Szeged. Between 1960 and 1966, he served as musical director of the State Puppet Theatre, and later as artistic director of the Hungarian People's Army Central Artistic Ensemble, remaining there until 1968. He joined the Budapest Operetta Theatre as a conductor in 1970. Throughout this period, he also worked as a first reader for Hungarian Radio, a role he took up in 1962. He joined the faculty of the Ferenc Liszt Academy of Music in 1972, first as a professor music theory, and later (1976-1992) serving as the head of the department. His work as a composer is extremely diverse, comprising symphonic works, chamber music and opera, as well as noteworthy pieces for wind orchestra. In 1978, Hungarian Television commissioned him to write his opera La putain respectueuse, which was also premiered in Görlitz and Paris, winning him the Grand Prix International du Disque Lyrique in the latter city in 1979. He has been recognised with numerous awards over the course of his career, including the Ferenc Erkel Award (1962, 1964, 1978), the Bartók-Pásztory Award (1989, 2005), the Kossuth Prize (1998) and the Artisjus Award (2004) as well as being named an Artist of Merit (1986) and and Artist of Excellence (1997).