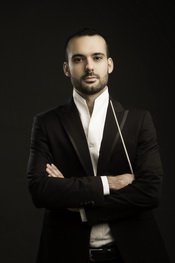 Strongly passionate about opera, he made his operatic debut in 2017 conducting a production of Puccini’s La bohème at the Bredeweg Festival in Amsterdam with the Netherlands Philharmonic Orchestra and the Dutch National Opera Chorus.

Born in the Italian city of Sassari in 1990, Sini began his music studies at his native city’s Conservatory of Music "L. Canepa", where he studied trumpet. He later continued his education at the Royal Academy of Music in London, earning his master’s degree there in 2013.

In London, he commenced studying conducting with Sian Edwards and collaborated with different orchestras, including the Southbank Sinfonia, with which he performed at the prestigious Royal Festival Hall.

In 2015, he moved to the Netherlands, where he studied conducting with Jac van Steen, Ed Spanjaard and Kenneth Montgomery in the prestigious National Master of Orchestral Conducting programme run by the Royal Conservatory in The Hague and the Conservatorium van Amsterdam, gaining his Masters degree in 2017.