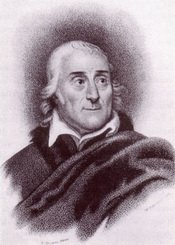 (1749-1838)
Italian librettist Lorenzo da Ponte was one of the most significant librettists of his day and a key figure in the rise of the Viennese opera buffa. Today he is best known for the librettos of Mozart’s Le nozze di Figaro, Don Giovanni and Così fan tutte.
He was born Emmanuele Conegliano in Ceneda and adopted the name Da Ponte in 1763 when his father converted from Judaism to Christianity. He trained for the priesthood and was ordained in 1773, but in 1779 was exiled from Venice for his politics and his adultery. He travelled to Dresden where he worked with Caterino Mazzolà, who recommended him to Salieri in Vienna. In 1783 he was appointed poet to the court theatre in Vienna. He had his first success as a librettist in 1786 with Il burbero di buon cuore by Vicente Martín y Soler, and that year wrote five further librettos, including Le nozze di Figaro. Over the next few years he worked extensively with Salieri and Soler, but after the death of Joseph II he was dismissed from his position in 1791. He travelled around Europe before settling at the King’s Theatre, Haymarket, in London, where he arranged operas and collaborated again with Soler during his stay in London. In 1805 he moved to New York and later Pennsylvania, where he worked as a grocer and general merchant and around this time began work on his autobiography Memorie. In 1819 he returned to New York and in 1825 and from 1827 to his death was Professor of Italian at Columbia College.