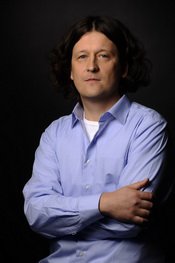 Géza M. Tóth obtained his master's degree in visual communications design from the Hungarian University of Applied Arts and went on to earn a DLA in visual communication and animation from the same institution in 2004. In 2005 he defended his PhD in pedagogy at the Eötvös Loránd University. Between 1995 and 2010 he was an instructor at the Moholy-Nagy University of Art and Design, and has been a professor at the University of Theatre and Film Art since 2010, also serving as the university's rector since March of 2014. He teaches regularly in Germany and Estonia, and in addition has since 2005 continuously participated as an instructor and researcher in the “Shared Language” programme run jointly by the Royal College of Art and Royal Music Academy in London. In 2007 he won a special Prima prize in the theatre and film art category, and was also recognised for his work with a Béla Balázs Prize in 2008. In addition to his applied motion picture work, he has participated since 1992 in numerous international festivals and competitions with his independent film projects. His film Icarus (1996) won the grand prize at the Augsburg International Independent Film Festival, while Maestro (2005) won nearly 50 awards at festivals, including an Oscar nomination from the American Academy of Motion Picture Arts and Sciences and the grand prize in Izmir, Kawasaki, Lucania, Neum and Patras. His more recent films, Ergo (2008) and Mama (2009) have also received numerous recognitions. In 2005 he staged The Miraculous Mandarin at Müpa Budapest in a production that was later also shown in Miskolc, Munich and Berlin. In 2006 he directed Bluebeard's Castle at the Bartók+ Miskolc International Opera Festival. After bringing Bach's St. Matthew Passion to the stage of the Hungarian State Opera in 2013, he also commenced his new production of the Ring there in 2015, with Das Rheingold.