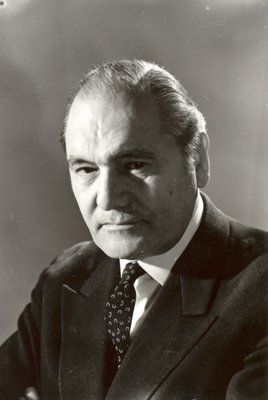 (1908-2003)
Tivadar Márk first earned a degree in textile design from Budapest's Academy of Arts and Crafts, and then continued his education studying art history at Pázmány Péter Catholic University. He spent 1934 and 1935 as an intern at the Opera House, then served as its wardrobe supervisor until 1938, whereupon he became a costume designer, and in 1945, chief costume designer, a post he held until 1981. In addition to his work at the Opera House, he also created costumes for every theatre in Budapest and for various outdoor stages (Margaret Island, the Szeged Open-Air Festival, Szombathely, Fertőrákos, Tata) He was also recognised for his design work for films and television dramas. He taught at the Academy of Arts and Crafts and at the Music Academy. Artistically, he was known for his physical and technical skill, his great understanding of materials, his adaptability and sense of proportion. He viewed costumes as the clothing for the performing artist's soul. An exhibition of his lifetime of work was displayed at the Bajor Gizi Theatre Museum in 1992.