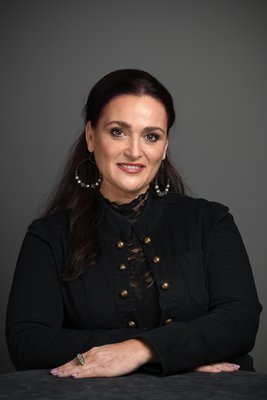 Born in Pécs, Lúcia Megyesi Schwartz commenced her studies in Szeged under György Sinkó, and then continued them at the Ferenc Liszt Music Academy in Budapest with Zsolt Bende, later going on to earn her third diploma at Musikhochschule Stuttgart in 1997, as a student of Júlia Hamari's. She won the Mozart special prize at the Francisco Viñas International Singing Competition in Barcelona, and later took first place at the first International Baroque Singing Competition in Budapest in 1993. She has taken part in master classes held by Walter Moore, Walter Berry, Ingrid Bjoner, Barbara Schlick and Júlia Hamari. She has been a member of the Hungarian State Opera since 1994, singing there the roles of Cenerentola, Cherubino, Dorabella and Mercedes. She has participated in several European concert tours and international opera productions, including appearing at the Eisenstadt Haydn Festival with Adam Fischer and singing the title role of Carmen in various German cities and that of La Cenerentola in Philadelphia. Her 2001 solo album features her singing excerpts from oratorios and opera arias.