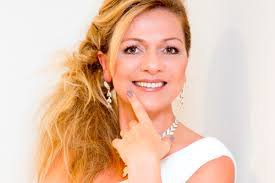 AndreaMeláth graduated as a singer from the Franz Liszt College of Music in 1998 under the guidance of Erika Sziklay. In 1996, she won a scholarship to participate in the Bayreuth Festival. She was awarded the Ministry of Culture’s Annie Fischer Scholarship in 1998. She features on a number of prominent recordings and has been awarded the Artisjus Music Foundation’s award on a number of occasions for her exceptional work in the presentation and introduction of musical works.

AndreaMeláth has participated in a number of premieres and is a regular soloist in contemporary musical concerts. She is a regular guest of the Mini Festival and Café Budapest. She often performs oratorios ranging from the Baroque period to today and is a featured soloist in various orchestral works both in Hungary and abroad. Lied singing has always been a part of her life, which she holds especially dear.

Her firstoperatic role was in the courtyard of the Castle in Lovasberény, where she played Mozart’s Cherubino in Le Nozze di Figaro (The Marriage of Figaro).That same year, she sang the lead in Purcell’s opera Dido and Aeneas asconducted by Catherina Mackintosh. She has been a recurring guest at the Opera since 1999, where she debuted as Rosetta in the world premiere of János Vajda’s Leonce and Léna.