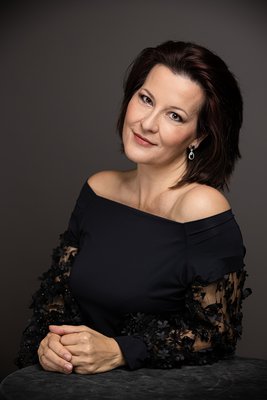 She graduated from the Liszt Ferenc Academy of Music gaining the title "Master of Music in Singing and Teaching". Her instructors at the academy were Erika Sziklay and Emese Virág. After graduating from the Academy she was admitted to the Opera Studio of the Hungarian State Opera immediately. The young dramatic soprano singer was awarded the prizes of several international competitions: in 2008, she won the second place at the world famous international competition, the IV. Monte Carlo Voice Masters. She won Top Prize at the 16th IBLA Grand Prize International Music Competition, a contest organised by the IBLA Foundation in New York City. Moreover, she was awarded the honouring Verdi, Shostakovich and Giordano Special Mentions as well. With her remarkable impersonation of Speranza she won the International Monteverdi: "LOrfeo" Music Competition 2007 (Verona/Mantua and She won absolute first prize at the 6th Renata Tebaldi International Voice Competition and was given the honorific "Renata Tebaldi" Voice of the Year prize. Besides, it is important to mention that in 2005 she won a stipend to visit the Bayreuth Festival. In addition, in 2002 and 2007, considered as a visionary performer of contemporary Hungarian musical pieces, she was awarded the honouring ArtisJus Prize by the Society of Contemporary Hungarian Composers. She has appeared on the stage of the marvelous Carnegie Hall numerous times.